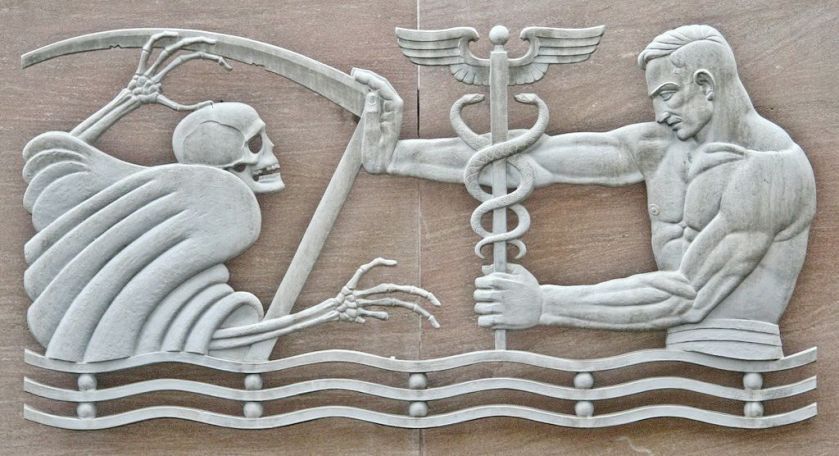 Right now, the spread of the coronavirus (COVID-19) in the US and UK are more rapid than in any other country, despite a clear head start in China, Iran, and Italy.

This is due to the flagrant mismanagement by the Trump and Johnson governments, each of them tied to the most extreme of “market freedom” economic ideologies, which as we can see in practice, means more profits at the cost of human needs.

In the US, a discussion of “reopening the economy”— as though for millions of workers forced to continue their jobs without basic protections it was “closed” in the first place— began soon after shutdowns were ordered. The idea that vulnerable people should be happy to die for the stock market was even presented in mainstream media. In the UK, the government proposed a strategy of “herd immunity” from the outset, before backtracking and instituting a lockdown.

This hyper-focus on profit at all costs and scientifically questionable “herd immunity” strategy are related. We share the analysis that “herd immunity” policies are a form of “epidemiological neoliberalism:”

“Much like the unconditional belief in the free market, herd immunity relies on the assumption that an epidemic is best overcome by leaving it unregulated. But just like neoliberalism, it results in violence against the weak and the poor: elderly and disabled people, homeless people, refugees and people with severe health conditions – many of whom are likely to also have a lower socio-economic status because of the correlation between poverty and illness. These are the people, who are at the highest risk of dying from COVID-19 – especially if the healthcare system is overwhelmed and doctors have to perform triage”

It is perfectly possible to tackle an epidemic more effectively even within capitalism, as diverse East Asian countries that experienced another type of coronavirus, SARS have demonstrated. Countries which have already earned praise for this vary from formerly socialist China to its Cold War rival government in Taiwan, from Hong Kong and Macau to Singapore and Japan. But the apparently most effective control of the spread of the virus in East Asia of course appears to be Korea, as the DPRK (alongside Cuba) is the most resistant to marketization of any of the old socialist bloc countries.

Ultimately, the COVID-19 outbreak reveals to us the extreme extent to which, in our society in particular, profits are put before human needs. But ultimately, as the environmental crisis and the crisis of capital will result in ever more frantic attempts to safeguard profits, only overcoming the profit motive entirely and replacing it with a global planned economy based on human need can suffice.

Socialists in the US must be at the forefront of calling for reforms under the watchword of “people, not profits” in the short term. But we must not think that we live in times were piecemeal reforms can save all but a narrow section of us: the scale of the aforementioned systemic crises combined with new outbreaks of epidemics in the midst of refugee crisis and climate change will expose the poorest and most vulnerable around the world to more severe health risks, to new wars and oppressive biopolitics.

Time is running out to save our species which is careening towards the edge of catastrophe driven by the cult of profits. Our call for “people, not profits”, cannot just be for a solution to a healthcare crisis at home, or fracking, or any other individual symptoms of the capitalist-imperialist world system. All of these causes must be taken up with an eye to the totality of the inhuman system, and we must unite with others to build political organisations capable of leading the charge for toiling humanity to liberate ourselves, before it is too late.

Workers and oppressed peoples of the world, unite.