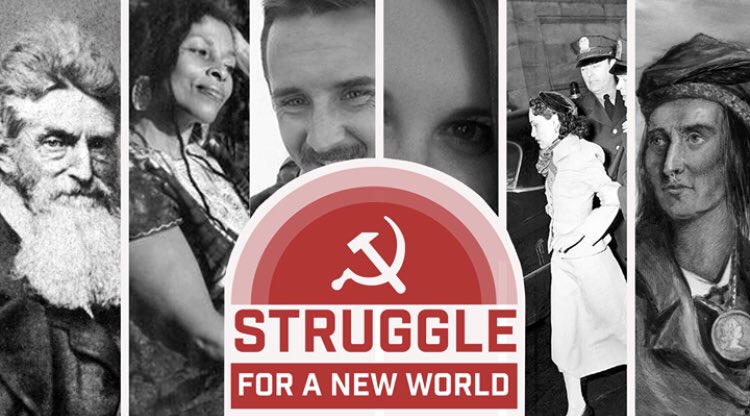 Struggle for a New World is a new revolutionary communist intervention in U.S. politics. We are composed of members and sympathizers with various organizations and traditions who have come together around a common vision of theory and practice in the current conditions of the U.S. and the world. As an editorial collective, we seek to build a publication which will provide a theoretical framework for political and social developments across the U.S. and the world, drawing on our collective and personal experience and contacts with diverse social movements which constitute particular parts of the whole of the revolutionary struggle which we are committed to.

We take our name from a line of the Russian version of the Internationale, the hymn of the international working class. It reads, “Мы наш, мы новый мир построим, – Кто был ничем, тот станет всем,” which translates to “we’ll build our new world, he who was nothing will become everything.” We unite behind this publication in the hopes of making some small contribution to the struggle to build this new world.

We uphold the heritage of the revolutionary theory and practice of Marxism, in its three sources and three constituent parts. We affirm that the power of Marxism is in its ruthlessly critical, dialectical, and materialist method that grasps the totality of human social life and experience. We believe in the revolutionary power and will of the toiling proletarian masses, divided into diverse national, gender, and other identities which in the first instance are trapped in a daily struggle for survival in the inverted logic of class society and in the final instance have the potential to overcome these relations and build a new society and a new world.

Our critical approach both appropriates and criticizes our diverse heritage, particularly that of the 20th century. We believe that the revolutionary waves of the 20th century, both in their successes and failures, are our heritage, our teachers, and our ancestors in struggle. We believe in the fundamental right and historical necessity of the people to seize control of their own lives and apply our criticisms to our society and our own existence as progressives and revolutionaries in our society with the aim of bringing together diverse trends of popular struggle to bring about a socialist way of life which will make this self-liberation, this control of our own lives, real.

We believe in socialism, which means the control by the proletariat over the means of producing the material wealth which springs from their labour, of women and the gender oppressed over their bodies and identities, of all peoples over their own culture, land, and destiny. We believe in a struggle against all forms of oppression, exploitation, and alienation; both now, in our immediate struggle to unite the forces to bring down the capitalist state, the dictatorship of the bourgeoisie, and further after the revolution, when the proletarian masses are in power. The alienation of which we speak is not only from the economic product of our labor but from our environment which is under assault, from our social lives which are becoming atomized, and from our very own identities, which we cannot develop under this inhumane and suicidal system.

We believe that through this struggle we can break the rising tide of fascism, overcome the capitalist-imperialist world which lurches from crisis to crisis that spawns the arch-reactionary forces known as fascists, transcend the nation-state and class society and pass from necessity into freedom: a communist way of life where each individual will contribute to the collective according to their ability and develop themselves freely from our collective human wealth in accordance with their needs.

We consider now to be the ideal time for putting forward a new publication for multiple reasons: internationally, the US empire’s decline and sharpening inter-imperialist contradictions have created many centers of intense struggle from the Philippines to Kurdistan to Latin America. From the super-exploited neo-colonies of Sub-Saharan Africa to the imperialist centers in Europe, from Korea to Mexico, the contradictions of this system are becoming ever more acute. In the United States, the failure of the Sanders campaign resulted in the most naked reactionary US presidency in decades, that of Donald Trump.

In the midst of this, revolutionary organizations are attempting to intervene in 21st century struggle using diverse means and are developing Marxist theory to higher levels. Here, the United States is in many ways sadly behind, and in spite of the continued or new existence of several sympathetic organizations, we consider it to be of vital importance to bring together diverse, critical voices to take up this task where other organizations are either too dogmatic, too clandestine, or both to intervene in the era of the internet as we see it.

It is of particular importance that we intervene in the United States, not only because of its continued status as the strongest imperialist power on Earth, whose politics must be reconnected to the revolutionary trends around the world, but because of the diverse struggles which already exist in the United States. As a settler-colony by birth, the United States cannot be discussed without reference to the national question, including not only the Indigenous nations on the US “mainland” (the so-called “lower 48 states”) and across its “legal” empire legitimized under various administrative schemes (Puerto Rico, Hawai’i, etc.), but also the Afro-American/New Afrikan people who struggle on the soil of their suffering and in the diaspora across the US (North), where they were driven by fascist KKK terror, and the various immigrant nationalities who still have organic connections to the social struggle in their homelands from which they were driven by war and economic circumstances brought about by imperialism. Further, even the “settler” proletariat is being drawn into struggle by the latest crisis, with thousands of youth joining the reformist organization, Democratic Socialists of America. The 21st century has also witnessed the popularization of radical gender politics in the form of feminism and queer theory, which has the potential to strike ideologically and materially at the social relations on which the family and class society is built.

We exist, as we consider the conscious vanguard must, to bring these struggles together. We believe it is possible to unite these struggles in spite of their diverse subjectivities by their objective common interests in the final instance: to weaken and ultimately bring down US imperialism and class society. While a culture of revolutionary solidarity in the US is weak, thanks to decades of FBI violence, particularly against oppressed nationalities, and modern revisionism in diverse (and sometimes hidden) forms which has sought to covertly divide these struggles in exchange for petty privileges for organizational leadership or for the labor aristocracy of the oppressor nation, we see signs that it can be rebuilt: Jackson, Mississippi is host to intense ideological and practical struggle by Afro-American proletarians, who have attempted to unite their righteous struggle for self-determination with the (still weak and largely social democratic) “white” left in the US (North), through Sanders’s visit, through correspondences, and through calls for solidarity and political interventions.

We hope that in some modest way, we can play a part in rebuilding a revolutionary solidarity between these struggles. We hope that we can gather forces to intervene ideologically within our publication and guide the struggle of our comrades in material practice. We hope that we can engage with our international comrades on diverse historical, political, and theoretical topics. We hope that the various honest revolutionary organizations in the US will engage with us in an honest and comradely fashion, and that we can struggle together and draw closer, so that our resources may be directed towards our cause of liberation and socialism.

Most of all, we hope that our writers and readers will help build a culture of positive and revolutionary criticism. We hope to use our political subjectivity to intervene in the objective conditions which have shaped us and shape the masses from whom we come into a new political subject. We hope that the socialist movement of tomorrow will be built in the image of the diverse proletariat, whose increasing consciousness of itself and the contradictions it faces and in which it exists, will be the beginning of a new era of struggle for human liberation.

We hope that it is not already too late to save humanity from the mad, inverted world of class society and profits. Human need has been not only buried but sacrificed on the altar of this violent, rapacious system. The environment’s degradation has set a ticking clock on our struggle to overcome our alienation from ourselves and our history and to seize control of the future.

WORKERS AND OPPRESSED PEOPLES OF THE WORLD, UNITE!